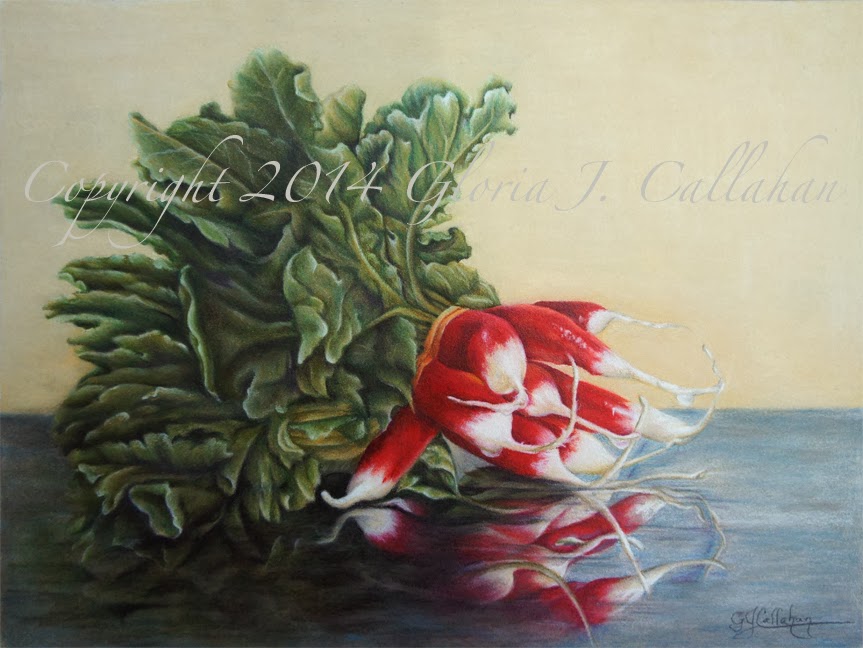 This was my last piece finished in 2013, actually on the 30th at midnight, one day to spare.  I couldn't get to photographing it until today with all the craziness that is my life.   This will be a new series "At The Root"  with my next one's reference shot set up and ready to go.  The photo here is typical of many photo's of art where red is in play.  Reds are notorious for not photographing true to the actual piece.   They seem to photograph brighter/not the deep shade it is, even with Photoshop touch ups.  Either the greens are off, or the background is off, when trying for a match of the reds.  Sense some frustration here............ Well just trust that as usual the in real life piece is richer in all ways.

Anyway, since my last post on making a goal list, my own has grown by leaps and bounds, which is usually the case.  I've been trying to juggle a fundraising event that my local artist association (Bon Air Artists) is putting on to benefit the World Pediatric Project.  As president of the association and one of the chairs of the event, I am neglecting my art creation.  (And have been for some time.)  My total count of CP pieces (we all know it's a slow medium) for 2013 was only 12 finished, with a small 13th  workshop piece almost done.  I hate to have unfinished works lying around even if they are workshop pieces.  But it's small and I should be able to finish it while on the road.

We won't talk about how you learn to say no to volunteering too much, since I clearly haven't learned that lesson yet!  But one of my goals every year is to complete a set number of paintings no matter the size.  This year I missed my mark by 3.5 pieces.  I'm progressing to my 100'th worthy of posting on my website pieces, and should hit that mark this year in 2014, sooner rather than later.  We all know that every piece is not worthy of posting on websites or Facebook for that matter.  Discretion is learned.

Hoping your January is warming up at least in a colorful way is not in temperatures...... On to the next one in the series.