This is a 16 x 12 Colored Pencil on Ampersand Pastelboard piece that was finished a few weeks ago.  The reference for this was taken at Richmond's Maymont Estate a wonderful Victorian manor and local wildlife park.  The sculpture of the 3 Graces is one of my very favorites and with a setting overlooking the James River here on this cold day in early spring was just magical.

Still working on my landscape skills with colored pencil on board and finding my way to my landscape style.  Not sure this is it but when I started this blog I didn't want to show just my well done works but how the process of developing and growing as an artist goes.  Stumbling along the way when you try new genre or techniques is all part of stretching as an artist.  I have completed a several landscapes that I am happy with, and hope that I create many more.  For me still life and botanical work comes much more easily, but easy doesn't lead to new discoveries.

As I remain committed to colored pencil work as a painterly media I must learn to embrace experimentation in order to achieve my goals as an artist.   So here you go, one of my experiments.
Keep creating and stretching.

Posted by Gloria Callahan, CPSA at 1:31 PM No comments: 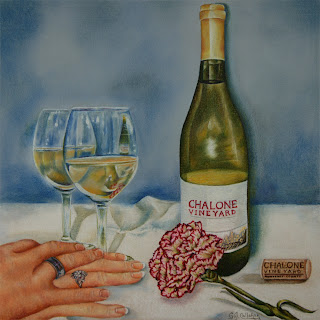 This is a commission piece I did for a customer reflecting on his first date with the woman he was about to ask to marry.  He wanted something similar to my recent "Wine By Candelight" piece he had seen at my Cooper Winery Show, but using the wine they had, flower on the table and their hands.  He sent me several photos of all the separate elements for me to place into a still life.   I waited to post it until now so the big event would have happened and she had her surprise gift and I'm sure said "Yes."

I primed a cradled hardboard panel on the top and varnished the natural wood sides so it could hang without framing.  This gave the piece a more contemporary look, and enabled me to leave it unframed.  Priming was with Colorfix pastel primer in a skyblue color, this primer has marble dust in it so the resulting finish is that of a sanded surface.  I chose the light blue since that was the color of the booth from the restaurant in his pictures and I had this also in stock.

I worked up a lay out of the entire piece as a sketch and emailed it off for approval.  In order to get the glass ware reflections and shapes I set up my own still life with a similar white wine, glasses and a red flower (but not the same kind as he wanted used).  I did this so I could see the reflections of A flower in the glasses, and tablecloth and also to have a live set up to work from.  So I used about 5 of his photos and my own set up to come up with the sketch and resulting work.  After completing the piece all in colored pencil I sprayed it with a UV Archival Varnish in 8 layers so it can hang without glass.

The fun in this project for me was creating a piece that would later be the documentation of their first date, and something they will look back on as their marriage grows.  I was honored to have made for such a wonderful young man in love.
Posted by Gloria Callahan, CPSA at 11:27 PM No comments: