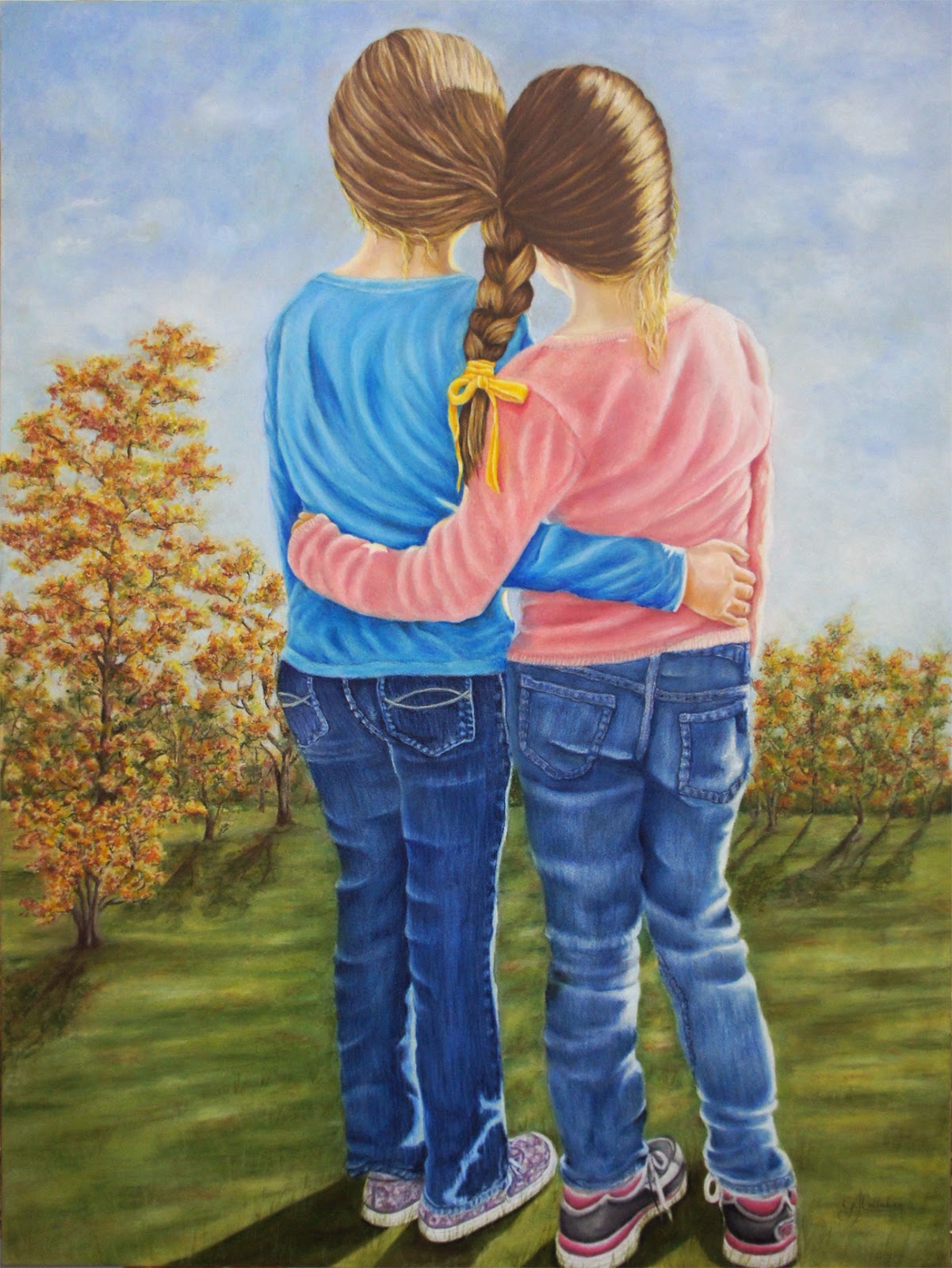 Figurative works often tell a story with their imagery and my new piece has it's own.  Each Tuesday morning I drive to my oldest son's home to get my two granddaughters on the school bus.   Our normal morning routine is like many, breakfast, lunches packed and involves getting their long hair ready for school.  The idea for this piece came about from creating braids in various styles.  Cora, the eldest is a blonde and Shauna is brunette.  Their bond as sisters is close even though they are three and a half years apart.  They have many similarities, they love to dance, are great students, and loving grandchildren.  But like any two sisters they have their own personalities and differences, much like their different hair color.

So I asked them to pose for me, something as little divas they love to do.  Braiding their hair together, blonde into brunette, their single braid became a lovely mix of them both.  I had the girls dress in contrasting colors, their favorites, pink and blue.  Jeans of differing shades completed the look.  Arm in arm they walked out the front door and down the porch steps to the front yard.  Keeping their braid tight they had to match their steps, they stepped in tune, left right left. 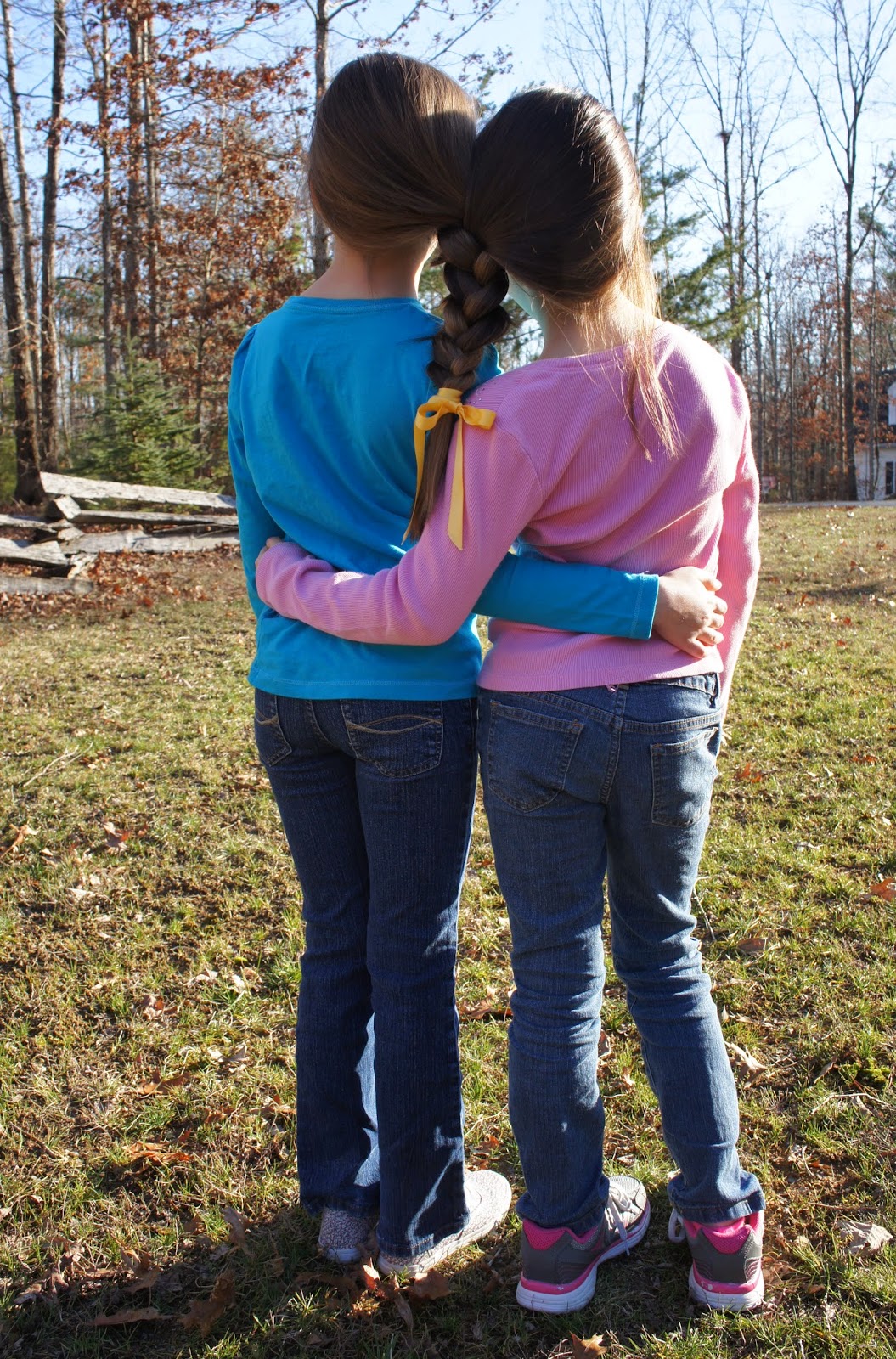 The late afternoon fall sun played an important role in giving their hair and clothing a great glow.  The actual background of the scene in my reference shot was a little too busy.  Too much to keep the focus on the girls and their bond. (hair and embraced arms).  So I simplified the background to a more distant colorful tree line softening the horizon and making grass less competitive with the figures.

After transfering the line drawing onto the white Ampersand Pastelbord, I completed the sky (using my usual rubbing technique to layout the clouds) and began the tree line.  Blocking in the trees after I did a watercolor pencil tinting on the grass.  It became obvious I needed to set it aside until I had worked out how simple I wanted the surroundings.  It's hard to get a start on a piece and set it aside for a while, but sometimes that's exactly what needs to happen.  My start on "Sisters" sat for more than six months. 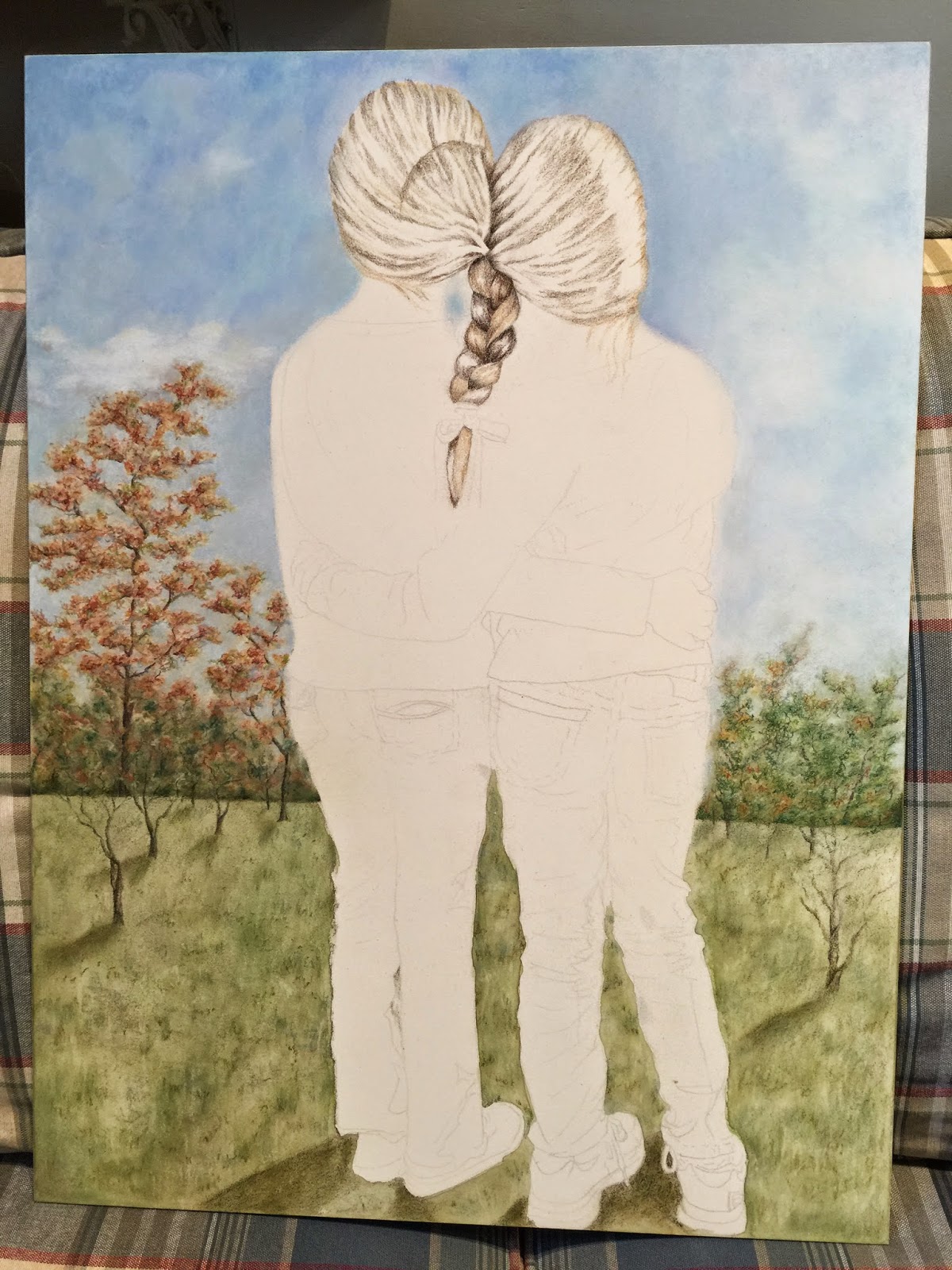 It's not my nature to leave work go unfinished.  The reality is, the work seems to stare back at me as much as I stared at it!  Analyzing me as much as I analyzed it.  Maybe that's how we come to an understanding of what needs to be done to bring a piece to completion.  Other pieces and obligations get in the way or completed as I worked out in my head what it needed.  So I started on the hair, weaving the braid just as I did the original braiding. 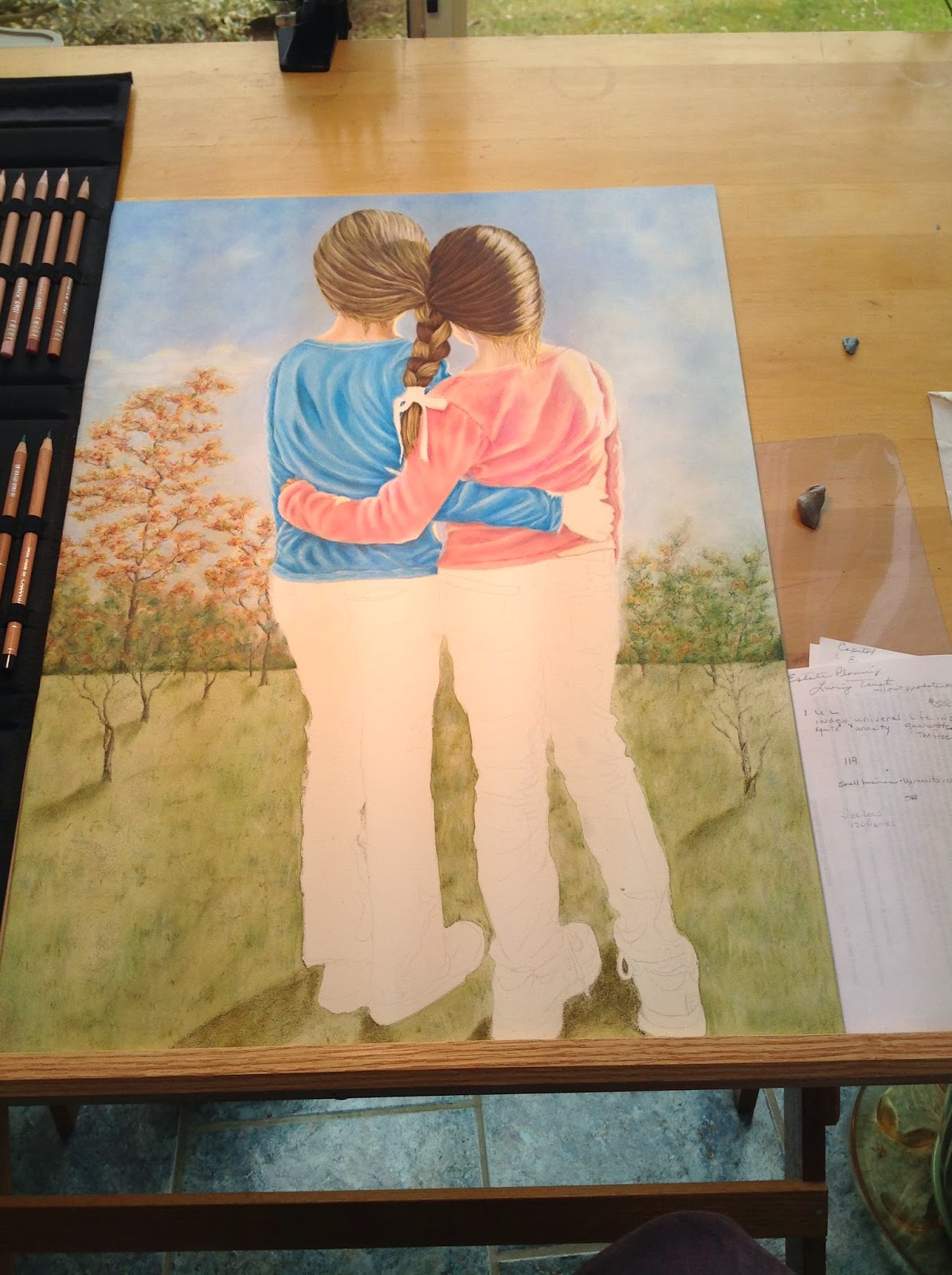 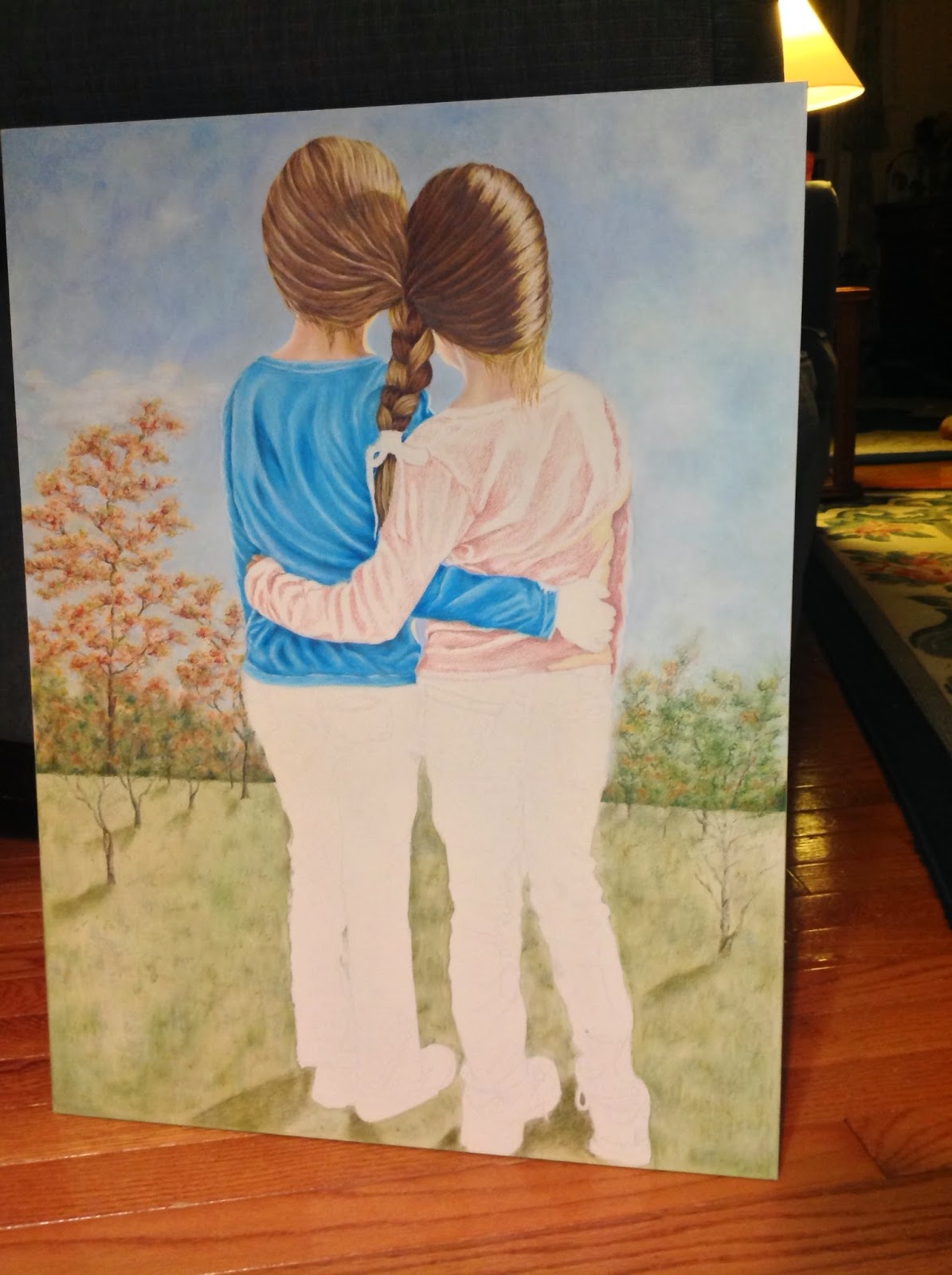 I then started on the girl skin at the neck catching the light of the afternoon.  Cora's blue shirt and it's folds then Shauna's pink shirt.  Keeping watch on the brightest lighting on Shauna's right shoulder. Moving on to their hands. 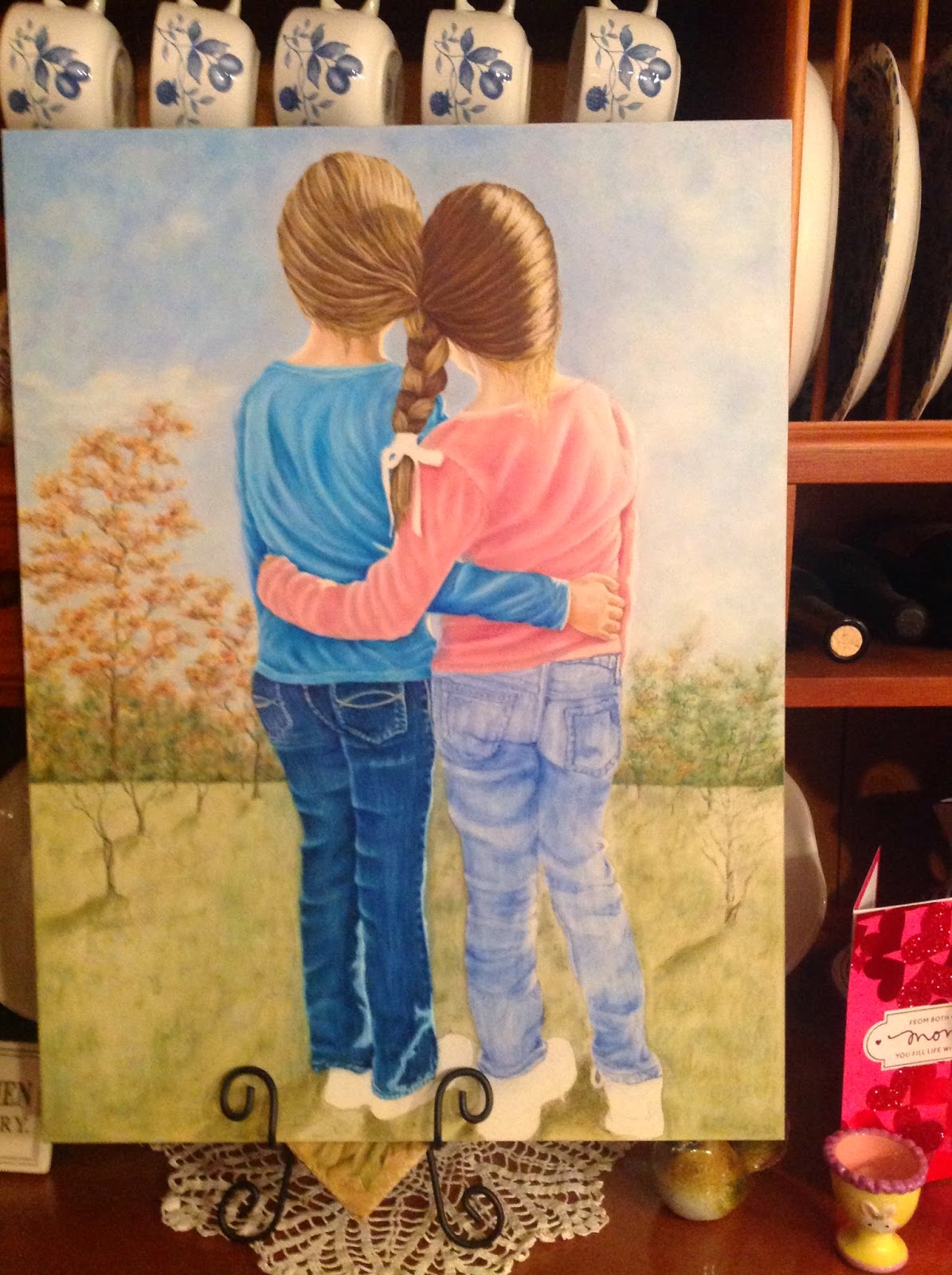 Working on their jeans, was actually so much fun, Cora's dark denim, Shauna's distressed denim.  Alike but yet different, just like my girls.  Again keeping the late afternoon sun on the front right hand edges of the pants.  Tenner shoes next and then finishing the fall foliage in the trees and adding CP to the underpainting of WC CP's in the grass.

In the time (one year and a half) from when I took the reference photo of the girls, till today Shauna is now taller than her older sister and the two are developing into young ladies.  Capturing a moment in time of these two sisters was a pleasure and a trial.  I hope you enjoy my efforts and the work in progress shots.
Posted by Gloria J Callahan Colored Pencil Paintings at 12:01 AM No comments: